Why You Should NOT Have 7 Sources of Income (Pt. 1) 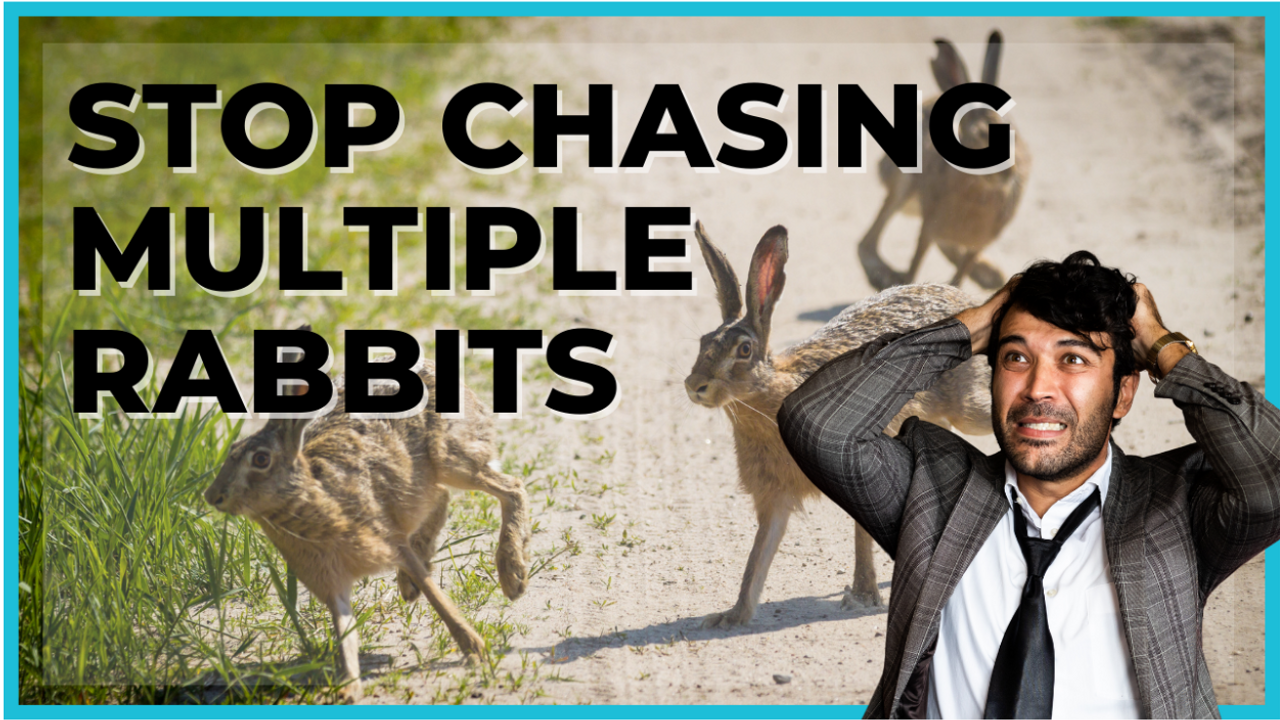 Every Instagram and TikTok guru is touting the statistic that the average millionaire has 7 sources of income. But is that true?

According to the IRS, most millionaires have these seven income streams:

Well if you believe the IRS, then I guess it's true. But just because it's true doesn't make it right.

Stick with me on this.

Before he grew his one source of income into seven sources of income–creating the millionaire status that we all aspire to–he had one source. Then he had two sources. Then he had three sources, etc.

It doesn't start all at once. He became a millionaire because of his intense focus on that first source of income. Once that source of income was taken care of and provided for his needs, then he went on to start the second source.

He Who Chases Two Rabbits Catches Neither

This old Russian proverb carries much wisdom: “If you chase two rabbits you catch neither.”

Think of each rabbit as a source of income.

Many entrepreneurs are not only chasing multiple rabbits, but are tending to several rabbit pens. In other words, they are diverting their focus onto many different projects or ideas, and in the end, very little comes to fruition.

You need to FOCUS! Follow one course until successful. Sounds easy, but this may prove harder than it seems. Even if you possess the discipline to follow one course, or to put your focus on one venture, you still may be chasing two rabbits.

This is the essence of a universal law called The Law of the Rabbits. You would do well to heed this law, for if you break it, you will never become the successful entrepreneur you aspire to become.

How to Apply the Law of the Rabbits

When you start a business, or find yourself in a state of transition where you commit to leaving a secure job to start your own business, there is a need for risk mitigation.  This means that you must figure out a way to cover your daily needs and living expenses.

In the beginning of your venture, it is likely that you spend the majority of your time solving the need to make a living out of your new venture (“the first rabbit”), and very little time focused on wealth creation or the building of a valuable asset (“the second rabbit”).

If it takes you 40+ hours per week chasing the first rabbit (i.e., making a living), how much true focus and quality of attention are you able to put into chasing the second rabbit (i.e., your long term vision or venture)?

It has been estimated that the majority of people spend only 5 to 10 hours of real quality and focus per month in the quest to fulfill their vision (“the second rabbit”). By the time you provide for your family and deal with the anxieties of life, very little quality time is left to fuel your passion.

But then you tune in to Instagram and TikTok and hear a guru tell you that you need to be chasing 6 other sources of income if you want to be a millionaire. Then your focus gets out of whack and none of the sources of income provide any meaningful wealth generation, let alone provide for your daily needs.

When you chase multiple rabbits, you stifle your ability to succeed in catching any of them.

My Story about Chasing Multiple Rabbits

Since I had captured the first rabbit and put him safely in a pen (in other words, my daily needs were covered by the income from the business that I had successfully established), I began chasing six other rabbits all at the same time. That’s what the Instagram gurus told me I was supposed to be doing.

Do you want to guess how that went? If you guessed that none of them did exceedingly well, then you are right. My coaching company floundered at first. My real estate investing company never truly got off the ground. My e-commerce company sputtered along and finally got shut down. My hard money lending company ran into problems with customers paying me back and I didn't have the mental energy to chase them down. And my holding company just ended up being a nightmare for my accounting team. Oh, and I made offers on two motorcycle dealerships and both deals fell through.

I was chasing 6 rabbits all at once and caught none of them. And at the end of the day, I was just tired.

It's funny how things usually work themselves out in the end even if we're too ignorant to work them out on our own.

When my e-commerce company got shut down, it freed up a lot of time for me to pay attention to the other rabbits.

Then when my motorcycle dealership aspirations finally fell apart, I began focusing solely on my coaching business. It was then that my coaching business actually started producing significant income and became the fulfilling venture that I had always wanted it to be. I discovered that coaching was the reason God put me on Earth, and that coaching is what I should be doing for the rest of my life. I would never have discovered that had I continued to chase those six rabbits all at once.

What Can You Do to Manage Multiple Rabbits?

In the next blog post, I will share with you a two-phase plan to approach this challenge and manage multiple rabbits.

I will show you how to leave a secure income and start the business venture that you truly desire without feeling frustrated, exhausted, and ultimately fail at chasing multiple rabbits all at once. Make sure you read the next blog post for the solution on how to manage multiple rabbits!

And if you're currently chasing seven sources of income because that's what the Instagram and TikTok gurus told you to do, stop it! Let's work together to get you to millionaire status without running yourself ragged and spending more time chasing multiple rabbits than you need to.

See you next week!

P.S.  One of the purposes of my Business Accelerator Group Coaching Cohort program is to show you how to chase one rabbit at a time. Click here to learn more.

Not sure which service works best for you?

I have a few slots open for free 20-minute consultations. Sign up to see if you qualify for one.

Enter your details below to join the challenge.